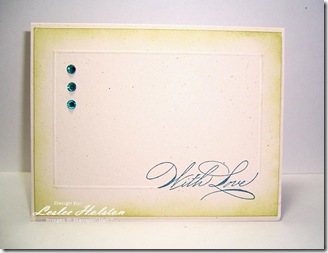 Once again, I’ve been incognito for several days.  ‘Me time’ has been at a minimum lately.  Getting back to my routine with the boys being in school has taken a toll on me and I hope I haven’t bitten off more than I can chew with my new PTA responsibilities.  I’ve just plain been exhausted!  Anyway, I’ve got to find the mojo and soon!  I’ve got a Stamp Club meeting coming up and my One Sheet Wonder Class shortly after that!

I started out with something simple.  Don and I celebrated our fourteenth wedding anniversary last week.  He isn’t a sappy card kind of guy and this simple card was short, sweet and to the point.  I started with a Naturals Ivory card base and layer.  I stamped the sentiment from Hand-Penned Holidays in Indigo Island and scored the “frame” using my Simply Scored tool (very cool tool!).  I sponged on some Pear Pizzazz along the outside edge.  Colored the Jewel Basic Rhinestones with a turquoise Sharpie® marker.  The layer is adhered to the base with Dimensionals.

Like I said, sweet and to the point.  It isn’t exactly what I had in my head and I wish I would have used Whisper White card stock instead.  But, it severed its purpose and let Don know that I love him very much!  :)

Thanks for stopping in today.  I hope you’ve been inspired to make a sweet and to the point kind of card for yourself.

Stampin’ Up! supplies can be purchased here.