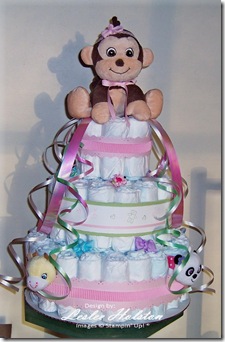 Oh my goodness!  I had soooo much fun doing this Diaper Cake Decoration!  This is the second one I have made.  I am so pleased with the way this one turned out!  Don’t you just love it?!  Adorable!  I received lots of compliments from those who attended the shower.  My niece said that it’s too pretty to tear apart and use.  I would feel the same way, however, I would get tired of looking at it day after day and it is designed to be usable.

In the center, supporting the tiers, is a 15 oz. bottle of baby powder (on the bottom) and a cheap baby bottle on top of that.  I sat at Adam’s baseball practice and rolled the diapers.  Coach asked what I was doing.  I proceeded to tell him all about Stampin’ Up! …okay, not really…but if it were anyone else…you know I would have booked a workshop :)  The diapers are rolled and secured with a rubber band.  To roll, open the diaper and lay flat.  I rolled the front in first so that the cutesy image panel would be hidden.  I wanted my cake to be all white.  Jesse tried to help me roll but he kept on making them sloppy and making potty-type comments and was quickly fired from the job (which is what he wanted any way).  Gotta love him! 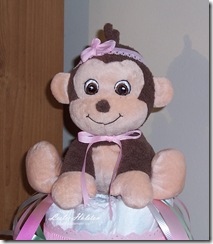 To build the cake, stand several diapers on end in a ring around the powder bottle.  Secure with a rubber band.  Repeat this process to add another two rows of diapers, thus creating your bottom tier.  The second tier is done in the same manner with two rows only.  You guessed it, the top tier has only one row of diapers.  This top row is surrounding the baby bottle.  Top the cake off with a topper of choice.  My niece likes monkeys so that’s what I used.  I found this sweetie in the baby department.  It originally came with a blue ribbon that was well secured to the monkey.  I simply tucked it up and hid it behind a some Pretty in Pink 1/4” grosgrain.  After all, she is having a girl! :) 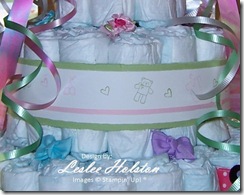 To hide the rubber bands, I made a band by piecing together some cardstock.  I punched the sides of the Pretty in Pink cs with the Eyelet Border punch.  I then wrapped some old retired pink ribbon around that.  The center band is Certainly Celery with a layer of Whisper White that I had randomly stamped with images from the Baby Bundle stamp set.  You know that thin little strip of cardstock leftover when you use a border punch?  You guessed it…I used that on the center band as well!  Might as well use up all the leftovers :)

The remainder of the embellishments on the cake are usable as well.  The flowers and bows are actually little headbands that I tucked in around the cake.  The little animals are baby wrist rattles.  Even the curly ribbon could be used on another pretty package! :)

It was a beautiful center piece on the gift table.  We even used it as a shower game.  Guess how many diapers in the Diaper Cake?  The closest guess gets the prize!  Most people guessed low.  Only one came close…and I bet she’s made one before ;)  It is time consuming but was so worth it!

Thanks for stopping by.  I hope you’ve been inspired to create something beautiful today!

Stampin’ Up! supplies can be purchased HERE!

Categories: Anything But A Card, Baby, Creative Projects (WOW), General