I know that fall is here when I start seeing this beautiful garden spider in my flower beds.  She’s known as a Black & Yellow Argiope 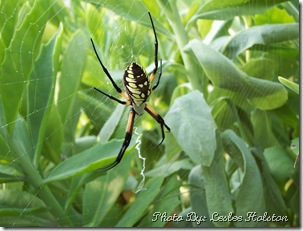 or  may also be called a Yellow garden spider, Banana spider, Zipper spider or Golden Orb spider but the boys and I have named her, ‘Bob’.  Every year for as many years as I’ve been in this house (ten to be exact), Bob graces my flower beds.  I’ve since learned that the females are the larger of the species, they aren’t aggressive, and their life span is only one year.  I know, Bob is a male’s name but once named, it stuck.  As you can see, she isn’t a small spider and I can’t imagine running into her web.  Ewwww!

Anyway, Bob is here again and I thought it a good time to stamp some spiders!  Of course, this spider looks nothing like Bob but it’s creepy crawly enough for this Halloween card. 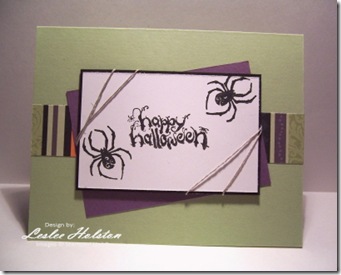 This layout is from SCS’ CAS#33 challenge.  The spider is found in From the Crypt and the sentiment in House of Haunts.  They are both stamped in Basic Black Craft ink on Whisper White.  I really love the craft ink.  It is bright and vibrant.  Just remember to allow a little extra drying time with the craft inks.  Or, you can speed the time along by using your heat gun.  I altered the linen thread by running it across a sponge with Platinum Shimmer Paint (found in the Holiday Mini Catalog).  I wanted a more web-like look to the thread.  Here’s a close up… 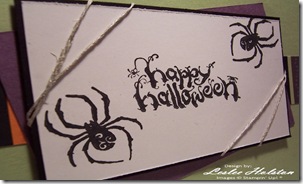 The main panel is layered on Basic Black with an offset layer of Perfect Plum.  The strip of DSP is in the Cast-A-Spell pack.  It’s all placed on a Certainly Celery card base.

This card is a really easy peasy cas card that would mass produce quickly.

That’s it for today!  I hope you’ve been inspired to look around you for inspiration.  I almost put my face right into this one!!!