That's right! I've been playing sketch-up this past weekend. What is 'sketch-up' you ask? Sketch-up is catching up on the sketches that I've been meaning to use. You see, I receive RSS feeds on all my favorite blogs. When I like a sketch challenge or a card I'd like to case, I mark them so that I can quickly return to them. I don't always have the time to play along the same day the post was released. And that certainly has been the case the past couple of weeks. So, I've been playing sketch-up all weekend. I've made a pretty good dent too. So, I'll have plenty to show you this week.
The first up is this awesome sketch by Mercy, MTSC33! Here's my card... 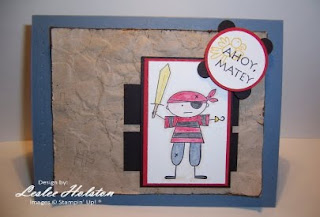 Adam's friend had a birthday party and he loves pirates! So, when I asked Adam what kind of card he wanted me to make, he immediately chose the retired Ahoy, Matey set. Adam wanted a treasure map and treasure chest on the card. I knew immediately what layout I would use! Mercy's sketch allowed for the map to be in the background. Here's a close up... 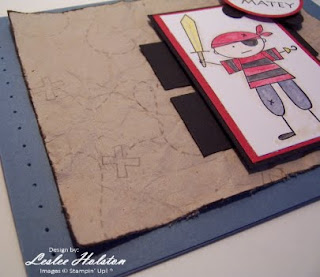 (You may click on the photo to enlarge it.)
I stamped the map using Sahara Sand on Kraft. We distressed the map by misting it with water and crumpling it up and then flattening it back out to dry. Adam did this step. He couldn't believe that I had even asked for him to mist it and was even more surprised when I told him to ball it all up. He was thrilled and did an excellent job. I then sent him to color the treasure chest using his colored pencils. Meanwhile, I used various inks and a blender pen to color in the pirate image. Both were stamped in StazOn Jet Black ink on Whisper White. Here's the chest, which we adhered to the inside of the card... 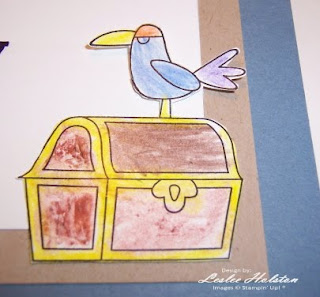 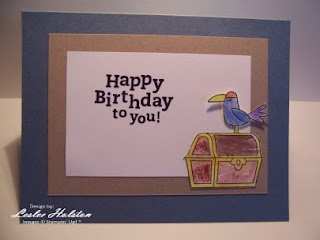 Didn't he do awesome?!! He rocks!!
The inside sentiment is the Birthday Wish set.
The card base is the retired Buckaroo Blue. I pierced down the left side of the card. I just felt it needed a little something for balance. Basic Black backs the focal images along with Real Red which highlights them.
This is a great sketch and I may just use it again with a more adult and feminine flair. Perhaps some DSP in place of the map and flowers in place of a pirate.
Be sure to check out Mercy's awesome blog, Lord Have Mercy! She has a great site to browse for inspiration!
Thanks for stopping by today. Come again soon!
Hugs ~Leslee~
Posted by ~Leslee~ at 9:00 AM